Monday 19th August
Working alongside the organisers of Prudential RideLondon, KruTalent programmed over 20 acts to entertain the many thousands of participants who took part in the FreeCycle event over the weekend of the 3-4th August 2013. Covering the eight mile traffic-free route; passing all the central London iconic venues, KruTalent programmed artists, performers, bands and street performers to interact with the 50,000 cyclists and spectators alike.
In addition to their Penny Farthing riders, Roving Magicians, Stilt Cyclists, Luni-bike Riders and ‘Loud Tunnel’ cheerleaders; who all formed their en-route entertainment, KruTalent also covered the 3 festival sites in Green Park, St.Paul’s and Tower Hill. Here they curated static acts to host shows drawing in spectators who stopped for a rest. Tower Hill saw the British Unicycling FreeStyle Champion unicycle over a tightrope whilst juggling knives, whilst St.Paul’s hosted ‘Style Bicycle’- the UK’s BMX Flatlander champions for the third year running. Green Park catered for the families and KruTalent ran a tent offering Face Painters, Balloon Modellers and Children’s Entertainers.

If this wasn’t enough, to truly bring some excitement and ear candy to the table, KruTalent sourced three of their favourite musical acts and provided them converted bikes (including a sofa!) and some lovely Get Cycling volunteers, enabling them to do continual laps of The Mall and St.James’ Park. A well- known Mariachi Band, Beat Boxer and Brass Band were all part of the mix.

James Kemp, organiser for RideLondon Freecycle commented “The FreeCycle was intended as the festival at the heart of the Prudential RideLondon weekend celebrating all that cycling has to offer.
Kru Talent were brought on board to help deliver entertainment and music across the 8 mile route and 3 festival sites. Vicki and team did an amazing job in pulling a whole host of performers and musicians together from bmx free stylers, unicyclists, a beat boxer to a mariachi band playing on the back of a bike.
Kru’s creativity, management on the ground and ability to meet our often last minute requests was extremely impressive.The majority, if not all, of the televised and print media coverage of the event included footage and images of performers and musicians provided by Kru.
We look forward to working together again in 2014 on an even bigger festival of cycling.” 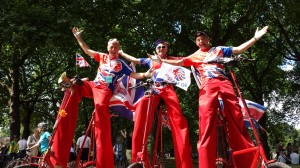 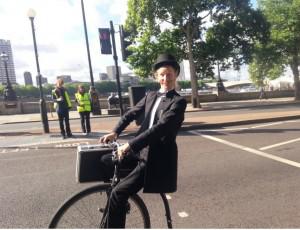