#TopSecretCoffee is a famous high street brand that toured 7 locations over 7 days nationwide. The team of trained barista’s and ambassadors kept the brand a secret so that members of the public could taste the coffee without having any preconceptions. The brand uses freshly ground coffee beans which are sourced from Central America, South America and Africa and are sourced with the Fairtrade seal of approval.

Throughout the trial, over 4,000 members of the public enjoyed their complimentary coffee in return for their feedback on the Top Secret brand.  They also received a voucher for a free coffee to be used in store once the brand was revealed to thank them for taking part.

The team toured major city hubs throughout the UK, prompting speculation and intrigue over who was behind the fresh coffee.  They found that 92% of people described #TopSecretCoffee as good, very good or excellent and 4 in 5 people thought the coffee was ‘as tasty’ or ‘better than’ their current coffee brand. Susanne Collins from Havas PR UK said “we wanted the coffee to do the talking”. The campaign was conceived by Havas PR UK and implemented by their live activation and specialist staffing partner Kru Live. It has now been revealed that the premium product which rivals that of other leading coffee chains was in fact Greggs.

To further raise awareness of Greggs freshly ground coffee and as a bit of fun to mark the start of the new series of Britain’s Got Talent, Greggs had some exclusive portraits of the judges, along with presenters Ant and Dec, designed out of the froth on top of some cups of freshly ground coffee by the UK’s only Coffee Artist – courtesy of Kru Talent.

Watch the team in action now! 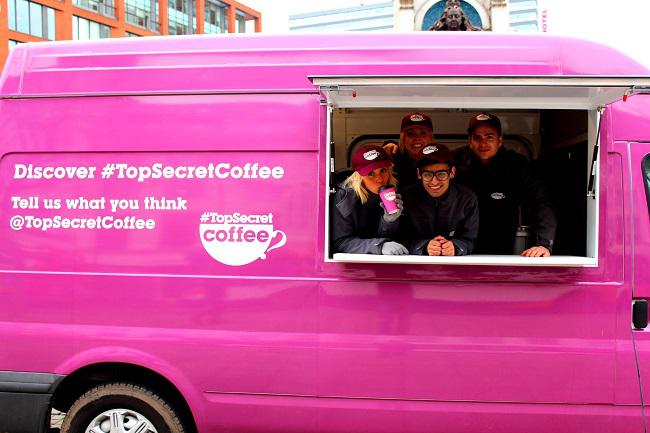