Tuesday 25th February
SSG Create contacted KruTalent in September 2013 looking for a partner to provide talented actors for the new HTC campaign. To celebrate the Here’s to Change platform, SSG were looking to create characters from the recent advert (featuring Robert Downey Junior) to engage with delegates through a fun competition that would engrain the new HTC message in their memory. The characters would be dispersed throughout conventions providing delegates an opportunity to guess their character and create their own HTC-ism.

HTC characters for this campaign included Hot Tempered Cheerleaders, Hysterical Texas Cowboys, Hog Tied Clown and Hipster Troll Carwash. KruTalent were instructed to cast the right actors and actresses for each character, produce the costumes and help deliver the campaign.

The campaign has toured various events throughout the UK including the MOBO awards and the EE conference in Wembley last month.

Mia Robertson, Project Manager, SSG Create commented:
“The guys were awesome – everyone (client/delegates) noticed the brilliant banter they had between each other and with the attendees. Brilliantly cheeky but bang on brand at the same time. We love them! Really happy with everything and the client loved them. Sure I will be in touch should they need anyone in the future.” 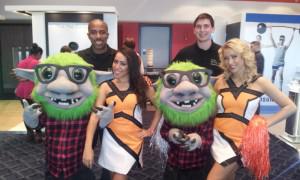