Since the first Download Festival back in 2003; where Iron Maiden headlined and Metallica were the unannounced secret act, Live Nation have spent a decade developing a rebellious rock festival to the masses of moshers! Download is now recognised as the second largest festival in the UK (only second to Glastonbury itself), and often appears in the top 3 rock and metal festivals throughout Europe.

With their growing reputation and ever expanding fan base, Live Nation wanted to bring a new edge to the 2014 festival by offering a ‘City of Sin’ themed arena for their after hours general admission area. And what better place to introduce their intention for the festival than their November launch party!

KruTalent were tasked to create a ‘City of Sin’ following a brief to deliver “dirty late night Vegas outskirts.” Jolting straight into action KruTalent set to work creating Seven Deadly Sins hostesses to meet & greet Download’s guests on arrival, and escort them into the City. Wrath, Pride, Envy, Gluttony, Greed, Sloth and Lust all made an appearance.

To keep their guests entertained, KruTalent cast several captivating acts to perform throughout the evening. These included a contortionist, raunchy burlesque dance troupe, an edgy roving illusionist/magician and a freak show ensemble known as Dolly’s Delight. 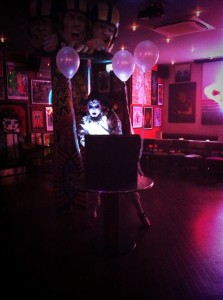 Vicki Robey, Talent Manager from KruTalent International said “We knew our team had to portray the rough and ready feel for the new area within Download Festival, and I am pleased to say our often controversial acts seemed to fit the bill perfectly!”

Alex McCruaig, Head of Creative for Live Nation commented “Once again KruTalent have gone above and beyond with the brief I set them. From the opening discussions with Vicki, to the actual event, the project was seamless. I gave them idea of budget and a loose brief and they just get on with it, no fuss, no dramas. They get what we do and work with the pace and attention to detail the music and advertising industries command.” 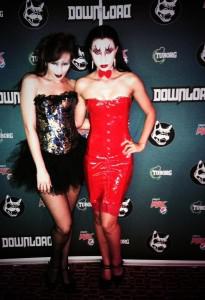